197 photos
Brighton Festival's first big event - the Children's Festival - was the biggest and best its ever been. Despite the threatened rain, which fortunately held off for the duration, there was a massive turn out and the streets of the North Laine were thronged with children in the fantastic costumes they had made waiting patiently for their turn to move off. There were so many of them the front end of the parade had reached Madeira Drive before the back had even started, and it proved a fabulous spectacle for those who lined the route. This years Festival Director Vanessa Redgrave started the parade, and the city throbbed to the sound of drumming as it moved off from Kensington Street, wended it way through Jubilee Street and New Road, across into East Street and on along the seafront to Madeira Drive. Same Sky worked with teachers, parents, artists choreographers and musicians to help 5000 young people explore the theme of 'story of stories' and s we have come to expect from this marvellous organisation the results were stunning indeed.

For more information on this years Festival events and Same Sky go to
http://brightonfestival.org http://www.samesky.co.uk/ 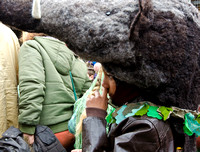