18 photos
I was lucky enough to be invited to Casino night at Old Bank Steak & Ribs on St Georges Road, Kemptown last night - lucky because my dining companion, Ed, seemed to be on a winning streak and it also gave me the opportunity to try out the menu there. We were welcomed by Steven, who made a few suggestions for our choices from the comprehensive menu. Asking about the meat we were pleased to find that is supplied by local award winning butchery Bramptons - most of the beef is Sussex bred with some Scottish specialities. Bramptons also supply cheese for the cheeseboard. With a wine list chosen by Jonathan Ray [GQ drinks columnist and former wine editor of the Daily telegraph] and supplied by Henry from local Butler's Wines it seemed a promising start to the evening at this traditional steakhouse style restaurant.
Once seated, along with our menus, we were presented with gaming vouchers and - nice touch - a jug of iced water. Stephen had suggested we might like to leave room for dessert as most are based on their home made ice cream, but as we were quite hungry this didn't let it slow us down! I was tempted by the Pan Fried Squid [£5.95] as a starter, but thought it would be rude not to try the ribs, particularly as they do a sampler size for just £2. These proved to be excellent, the 24 hour marinade and house barbecue baste beautifully flavouring succulent meat that slipped off the bone into my mouth. Ed chose the Garlic Bread [£3.50] a grilled baguette, simply oozing garlic butter.

Although the menu includes fish - Wholetail Scampi, Beer Battered Haddock or fish of the day - we felt a meat feast was in order for the main course. Ed, who was in his element here - he's not a great one for spices and vegetables and 'messed up cooking' and at Old Bank the choice to have unsauced meat is a given - had chosen the Roast Quarter Chicken and Old Bank 7oz Sirloin Steak combo [£16.75]. After much deliberation between the Old Bank Speciality Pave rump - sourced from the Scottish Highlands’ Rory Duff farm [£7.50/100g ] and the 14oz T-bone [£20.95] - I chose the latter. A side dish is included in the price, and you probably won't need more than one, but as Steven had recommended the onion rings we ordered those in addition to my green salad and Ed's chips. Simply prepared meat can often be the most difficult to get right - if the basic ingredients aren't good or aren't properly cooked they have nothing to hide behind. Old Bank did not let us down on either score, beautifully cooked, juicy and full flavoured steaks and chicken that needed no adornment. Crisp fat cut steak chips [none of that stringy nonsense here!] fresh green salad and tender sweet perfectly battered onion rings were all that were needed as accompaniment. Of course if you DO fancy sauce there is plenty of choice from in house made Barbecue Baste [perfect on the ribs] through traditional to spicy sauces and toppings.
Wines being available by the glass [125ml/250ml from £3.90/£6] made choice easy, although had we gone for a bottle the prices are also extremely good. Much as I love red wine it doesn't love me, and sacrilege though it may, had to avoid them. Ed enjoyed his crisp dry 2010 Bolla Pinot Grigio delle Venezie [£14.50] which would have worked well with the fish but was equally good with Garlic Bread. Another non-red wine drinker... So shoot me…;-} If your choice lies outside the wine list another great feature of this welcoming restaurant is that you can bring your own. Corkage is free Tuesday, Wednesday and Thursday, otherwise £10. I must admit that having a taste for Sussex sparkling wines I might be tempted to do this, although the Louis Dornier & Fils NV Champagne at £7.50 a glass, £27.95 a bottle wasn't a bad substitute, [and - Sussexophile note - they do have Plumpton Estate Cloudy Ridge Rosé 2009 [£18.95] on the list].

We had plenty of time to explore the gaming tables before our main course arrived, and insisting on veracity for a few photos I got Ed to work on the roulette table where he promptly amassed a small fortune in funny money to be exchanged for Old Bank Vouchers. Casino night is just one the various occasional themed evenings at Old Bank, which can include whisky tasting and wine tasting alongside a meal. Our evening was going well, and feeling richer we resumed our splendid repast.

After this we weren't quite sure about room for dessert, but the excitement of a another little flutter with the dice and blackjack tables gave us courage, coupled with the wonderful option of taster size house made ice cream [£1] and the severe temptation of Raspberry Meringue Delight: melt in the mouth meringue with ripe raspberry and creamy smooth ice cream - heavenly!. [£3.95]. We gave in, ordered and didn't regret it. Although Old Bank only make vanilla ice cream, the dessert menu combines it with a wonderful choice of flavours and ingredients in their sundae menu. For the very brave there are traditional standards like apple pie, waffles, brownies and cheesecake. I may have to go some time just for dessert and another local treat - Small Batch Coffee.

If you are hankering for an evening of fun and simple good food that won't [ahem!] break the bank you can't go wrong with Old Bank Steak & Ribs. Voted one of the top 10 Brighton restaurants in the 2011 Foodie awards it's a locally run business with a comprehensive menu [which includes some vegetarian dishes], great wine options, a lot of locally sourced produce and kids meals for under a fiver. There is also a lovely terrace outside for finer weather. You really don't have anything to lose - even on Casino night when the playing tokens are complimentary!

If you are on the Hove side of town try their sister restaurant Hove Bank in Palmeira Square, Hove.
For full information and menus go to 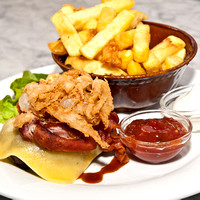