292 photos
Brighton's seventh annual Naked Bike Ride mustered in Preston Park under grey skies which didn't dampen the enthusiasm and humour of the several hundred riders taking part. A celebration of bikes and body power, a protest against global car culture and the environmental destruction of our planet and our health caused by our energy hungry culture the symbolism of nudity takes the vulnerability of cyclists to an extreme. But it also shows a healthy two fingered salute to media led consumerist ideals of "the perfect body".
I joined in as a cyclist, going as bare as I dared [a red lycra catsuit] but also as a photographer, and it was a joy to photograph people who were so obviously happy with how they looked and comfortable with their bodies. They may not conform to the unrealistic airbrushed/photoshopped "perfection" that subliminally terrorises our self esteem, but they are truly joyously beautiful and perfect in themselves, their strength of spirit and courage of their convictions.
A festive spirit reigned as people prepared decorating each other with body paint, Olympic and Jubilee themes joining the sometimes humorous slogans and symbols supporting the cause, and divesting themselves of as many clothes as they felt comfortable with. In honour of the Olympic year a pre ride fun run and post ride skinny dip at the finish on Black Rock beach created a Naked Triathlon. Before moving off a minute of silence was observed to remember Brighton University student Jo Walters, fatally injured in a cycling accident.
The ride set off on its nine mile route, escorted by cycling police officers and a great beat from a bike trailer sound system, to wend its way down to Brighton Pier and along the seafront to Hove Lawns and the first rest stop. Here some donned a few bits of clothing for warmth to combat the chill of the rain which had started in earnest. Looping up St Aubyns and back along Western Road past Churchill Square and the Clock Tower then down through The Lanes to Old Steine for the second rest stop the applause and cheers from the crowds of spectators and amused shoppers, many of whom got out their phones and cameras to record the event, helped keep the warmth and laughter going throughout the ride in the rain. A final loop past the Pavilion and through the North Laine, then up St James Street through Kemptown, a freewheel down Dukes Mound to the sea and the finish at Black Rock.
I haven't edited down the photos here as much as I normally would because I think everyone deserves to commemorate their participation in this hugely enjoyable event for a great cause - well done to you all!


For more information about the ride go to www.worlnakedbikeride.org/brighton
The Jo Walters Trust: www.jowalterstrust.org.uk 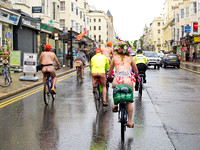 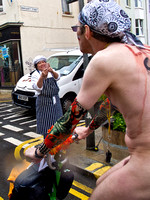 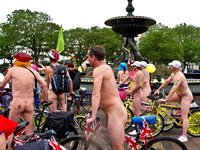